With the release of iOS 9 for iPhone/iPad, and OS X El Capitan for the Mac, Apple made some significant changes to the software that developers use to make apps like games. Usually, Apple does a great job at making sure that when they release new software, that it remains compatible with existing apps. Unfortunately, this time they released their operating systems with some major flaws. In fact they broke thousands of existing games, and entertainment apps.

This usually doesn’t happen when programmers like me, use only what’s called “public Application Program Interface’s”, (API’s), when developing our apps. This ensures that the developer is using the currently supported software routines and protocols in their apps. When Apple decides to remove or change a function, they “deprecate” it, and give us fair warning.

What appears to have happened this time is that Apple made some “low level” changes to the operating system that are out of reach to “high level” programmers that rely on their API’s. In doing so, many of us have our hands tied until Apple releases software updates to fix these problems.

All of my apps have been affected by this. I’ve been working on updates, but most of the issues are in Apple’s hands. While they have fixed many of the bugs with iOS 9.1 and OS X 10.11.1, they still have some work to do.

In the meantime, while I’m hard at work fixing my apps, make sure that you update your devices to the latest versions of iOS or OS X.

I’m having an issue with Nightlights since the update this week. It actually gives me an error message that says: The file couldn’t be opened because it isn’t in the correct format. The file might be corrupted, truncated, or in an unexpected format.

I’ve tried uninstalling and reinstalling twice, getting the same message each time. I’m running OS X Version 10.9 Any idea what might be going wrong?

I believe it has something to do with Apple’s new sandboxing technology. The new sandboxed version of NightLights tries to import the old non-sandboxed preferences, which may cause some problems for some users.

Here’s how to fix NightLights Desktop:

If NightLights completes it’s launch, but is not displaying properly, or appears unresponsive, try resetting NightLights: 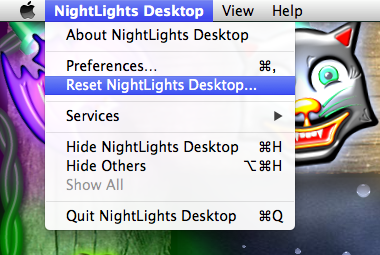 ..
For most users, this is all you need to do! However, if NightLights won’t launch at all, try locating the old preference file and deleting it.

That should do it!

FireworX Stand No Sound on iPad

I purchased Fireworx Stand. I get no sound on my iPad first generation.

I’m not sure exactly what is going on, but here are a couple of steps that should fix it…

I purchased Stormz Screensaver and Virtual FireworX Screensaver via PayPal a couple of days ago but haven’t received my codes yet.

After completing your PayPal transaction, you should have been sent to a website to retrieve your registration code. I also try to send a confirmation email with the code within 24 hours.